Ph. D., born in 1947, has been involved with not-for-profit organisations for well over 30 years – as a volunteer, staff member, board member, consultant, and researcher, and lecturer. Since 1989, he has been managing director of Maecenata Management, a consultancy that specializes in foundations and associations, corporate citizenship and philanthropy, and since 1997, he has also been the director of the Maecenata Institute for Philanthropy and Civil Society, Berlin. Furthermore, he is Executive Director of the Maecenata Foundation, Munich, Deputy Chairman of the German-British Society, Berlin, Chairman of the Board of the Fliege Foundation, Feldafing and Deputy Chairman of the Board of the ADAC Foundation, Munich.

He studied Political Science, History, and History of Art at Colgate University, Hamilton, NY, USA, and Munich University, Germany. He graduated as an M.A. in 1974 with a thesis on The Levellers, a 17th century English citizens’ action group. After serving at World Headquarters of the Sovereign Military Order of Malta (an international catholic disaster relief and medical aid organization) in Rome for two years, he became regional director for the Order of Malta Relief Service in Bavaria. Subsequently, he held a position in public life while serving on the board of a number of foundations as well as other NGOs, including German Caritas, where he was Vice-President in 1984/85. After becoming an independent consultant in 1989, he became increasingly involved with Third Sector research and chaired the German advisory committee of the Johns Hopkins Comparative Nonprofit Sector Project from 1995–2000. Today, while still acting as a consultant, his main focus is on research and public policy to do with civil society and philanthropy. From 1999 to 2002, he served as member of the German Federal Parliament Commission on Civic Action. He chaired the European Policy Working Group of Europa Nostra (from 2004–2010), and sat on the board of the Fondazione Cariplo, Milan/Italy (from 2000–2007), and a number of other nongovernmental organizations at home and abroad.

His approx. 600 publications, in German as well as in English, Italian, French, Chinese, Turkish, Japanese, and Polish, include books and articles on foundation issues as well as cultural policy, the third sector, and civil society. 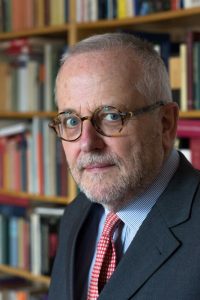